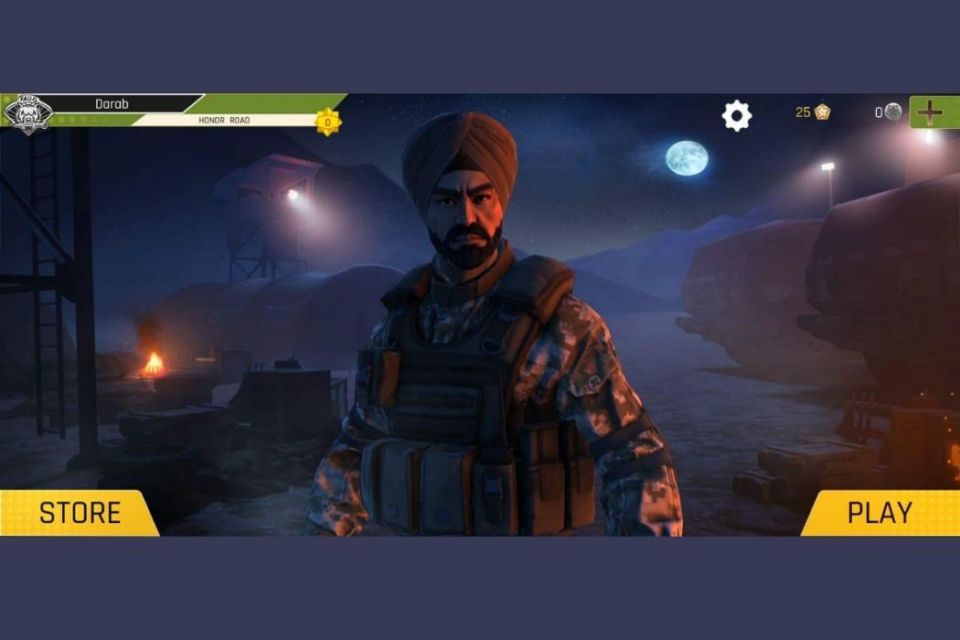 Updated News From FAU-G Game and Apple iPhone link. FAU-G the famous game in the world of gaming marketing is now available on Apple iPhones, iPads for download. Users how using the latest version of the IOs 14 or IOs 15 window in their iPhone can easily download this game on their mobile and iPad.

In other words, after a two-month wait fearless and United guards also know as FAU-G is finally available on Apple Store. The made-in-India title debuted in the country on 26th January with a single campaign. It is rolling out in the global market only 1 week later than its debut.

As per its App Store listing, the title is 643MB in size and requires iOS 10.0 or iPadOS 10.0 and above to function. The app is free to download, though it supports in-app purchases for artilleries. 30 coins within the app are worth Rs 89 while 1200 coins are worth Rs 899.

The development was also shared by FAU-G developer nCore Games on Twitter and other social media handles. Last month, the developers had claimed the tile would soon get Deathmatch within the game to enable multiplayer mode.

Typically, the objective of a deathmatch is to frag as many players in the game as possible while keeping yourself alive. The upcoming gaming mode will reportedly enable users to form a team of five members.

Prior to the launch, nCore Games chief Vishal Gondal had also told News18 that the game would get Battle Royale mode, but no details have surfaced yet.

With its availability on the Apple App store, FAU-G will hope to reach out to more users and improve overall ratings. The title launched in India with huge fanfare, following the ban of highly popular PUGB Mobile.

After this latest updated users are wanted to know a few more questions on social media. They asked when its new update comes. What is the Keyword to play? What are the shortcut keys for the Play FAU-G game? What are the details of the level which they need to clear after playing this game?

To know more about the FAU-G game and other Games… you can visit our gaming section, Games.

To Know about the Updated News From FAU-G Game and Apple iPhone Read Here,

FAU-G: Fearless and United Guards from nCore Games will be a new game in itself and not a mere alternative to PUBG Mobile. The game will come to have storylines that will be inspired by real-life scenarios.

FAU-G Game launched on 26th January 2021 in India. This is the Made in India game and helps to Improve Indian Gaming Market status in the World Gaming Market.

The FAU-G developers had said that the game has clocked over 4 million pre-registrations on the Google Play Store before their launch. FAU-G’s pre-registrations are live on the Google Play Store the developers have not announced specifically if the game will come for both Android and iOS platforms. Let us take a look at what we know about the game, how to download it, and where to pre-register for FAU-G: Fearless and United Guards.

FAU-G was first announced in September 2020, soon after the government of India banned the popular battle royale game PUBG Mobile. Initially planned to launch by the end of October 2020, the game was delayed by a couple of months due to several factors.

The first teaser of the game was launched in October 2020, with a pre-registration for FAU-G going live next month, in November 2020 on the Google Play Store. Soon after the pre-registrations went live, nCore games announced that it clocked over 1 million registrations within just 24 hours.

With FAU-G, the makers will attempt to herald a new era of Indian esports once it starts launching its offerings in the public domain. “Once we get deeper into esports with our game offerings, we will automatically enter the entire arena of managing a gaming community. That is our long-term roadmap,” Gondal told us back in October 2020.

If you are confused with the FAUG controls & keyboard keys and seeking for the FAU-G Keyboard Controls to play the Fau-G game in computer emulator and mobile? Then lets we help you to play this game.

Playing FAU-G on mobile is exciting, but the pleasure is 10X more when you play it on an emulator. Keyboard controls in the FAU-G game are not so hard and can be easily regulated; anyone can master it after practicing for a few matches.

The shortcut keys mentioned below are for PUBG, and the actual keyboard controls for FAU-G are not yet released but you will be informed as soon as the game launches.

But most probably these keys will be very much similar to FAUG and there won’t be any issue while playing with the help of these keyboard controls and you can also use it to play PUBG On the emulator with these keyboard shortcuts.

Keyboard Shortcut For Fight In FAU-G

Yes, you can use any android emulator available on the pc that is capable of running android apps. One can use these 5 Best Emulator For PC To Run Android Apps

It is unclear, but if it is similar to PUBG, then there must be a quick chat, and I believe we may get a better quick chat than PUBG.

Yes, it will run but the smoothness that you can achieve with 4GB or higher RAM that can be experienced with it.

Can We FAU-G Play In Laptop?

Yes, you can play FAU-G on a computer as well as a laptop with the shortcut mentioned above keys by installing it on any android emulator.